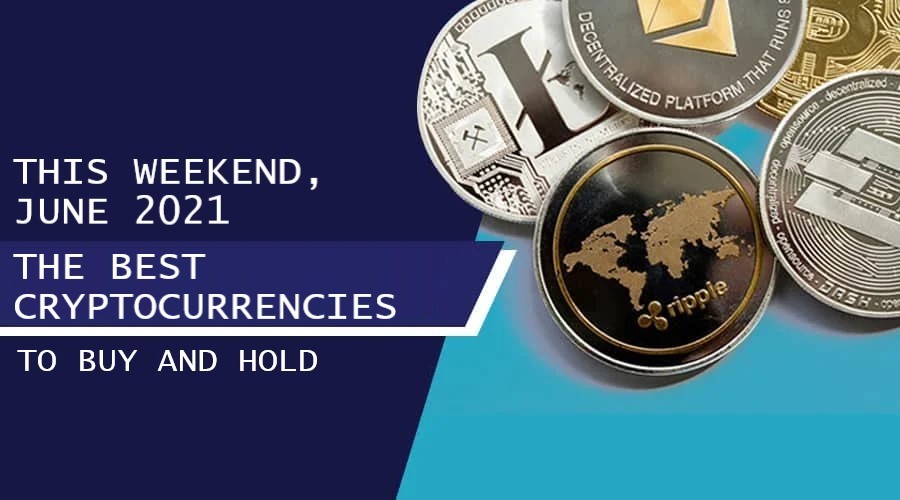 THIS WEEKEND, JUNE 2021, THE BEST CRYPTOCURRENCIES TO BUY AND HOLD.

Cryptocurrencies are constantly making headlines. No one wants to miss out on crypto investments, whether it's because of market troughs or because of controversial headlines, especially now that they realise how profitable they can be.

Here's a list of ten cryptocurrencies to watch out for :

1. Bitcoin (BTC)
Yes, Bitcoin is the most valuable cryptocurrency in terms of market capitalization and price, but it is being referenced here because of its recent price decline. Investors who want to invest in Bitcoins can now acquire more of it as a result of the recent crypto market meltdown and Elon Musk's decision to drop Bitcoin as a payment mechanism for Tesla. Bitcoin is currently worth around half of what it was at its peak, which was US$60,000. With the ongoing debate over cryptocurrency's environmental impact, it's difficult to predict whether Bitcoin will reclaim the US$60,000 level, but investors remain optimistic.

2. Ethereum (ETH)
You'd think that the second-largest cryptocurrency on the market would get all of the attention it deserves, but that's not the case with Ethereum. Despite its recent advances, Ethereum does not have the same level of appeal as Bitcoin. It's the first and most trustworthy smart contract and decentralised application network. In fact, the Ethereum blockchain is used by a slew of different cryptocurrencies. The Etherum network is where the majority of DeFi applications are produced, since the talk about them is kicking off the crypto market. Ethereum is a good alternative for crypto investments because of these factors.

3. Uniswap (UNI)
Uniswap is a decentralised exchange based on Ethereum's blockchain technology that has been dubbed "the future of money." Uniswap was founded in 2018, and it has since grown to become one of the most popular DeFi coins and exchanges. Approximately US$58 billion worth of transactions took place on the platform in 2020 alone.

4. Bitcoin Cash (BCH)
By 2022, Bitcoin Cash will have received some new improvements that may boost its worth. The most significant change will be the introduction of Scalenet, which will allegedly have the potential to have larger blocks, allowing for faster transaction speeds. Another change is the addition of ‘double-spend-proofs,' which will increase the Bitcoin Cash network's security.

5. EOS
EOS is the only thing that can compete with Etherum's smart contract technology. EOS appears to be capable of doing everything that Etherum does, but much more quickly and easily. EOS had a good year in 2020, and the good fortune is expected to continue in June 2021.

6. Tezos (XTZ)
Tezos' value dropped by 30% in February of this year, opening up a slew of investment options. Tezos conducted one of the largest initial coin offerings (ICO) in history, raising US$232 million in Bitcoin and Ethereum. Tezos places a premium on a powerful and decentralised decision-making process, making it a formidable crypto competitor. Its network is adaptable enough to accommodate any modifications and tweak its features based on what works and what doesn't. Tezos reached an all-time high of US$7.67 when investors realised the cryptocurrency's potential.

7. Stellar (XLM)
Stellar proposes to use tokens to enable cross-border transfers. It also features a decentralised exchange where users may trade a variety of assets. Stellar has also developed a micropayments service that can be used to tip people online. But it's Ukraine's ambition to employ Stellar's blockchain technology to establish a digital currency for its central bank that makes Stellar a hot buy.

8. Chainlink (LINK)
Since 2020, Chainlink has been on a roll. Other cryptocurrencies don't have oracles, but Chainlink does. Oracles connect blockchain to off-chain data and can also be utilised in smart contracts. This coin, according to crypto specialists, provides oracle services to around 50-80 percent of all DeFi apps.

9. Dash
Dash has the capacity to send transactions anonymously, and the Dash platform, which is set to launch soon, will allow developers to build decentralised apps on the network. These and other enhancements will improve the network's speed and security, making it a wise investment option.

10. Litecoin (LTC)
In terms of market capitalization, Litecoin is the 12th largest cryptocurrency. It's dependable, one of the most dependable cryptocurrencies, and also the oldest. Litecoins provide much of the same benefits as Bitcoins, but with reduced costs, improved security, and faster transaction rates. Look no further than Litecoin if you believe you can trust an old-school altcoin more than other crypto choices.