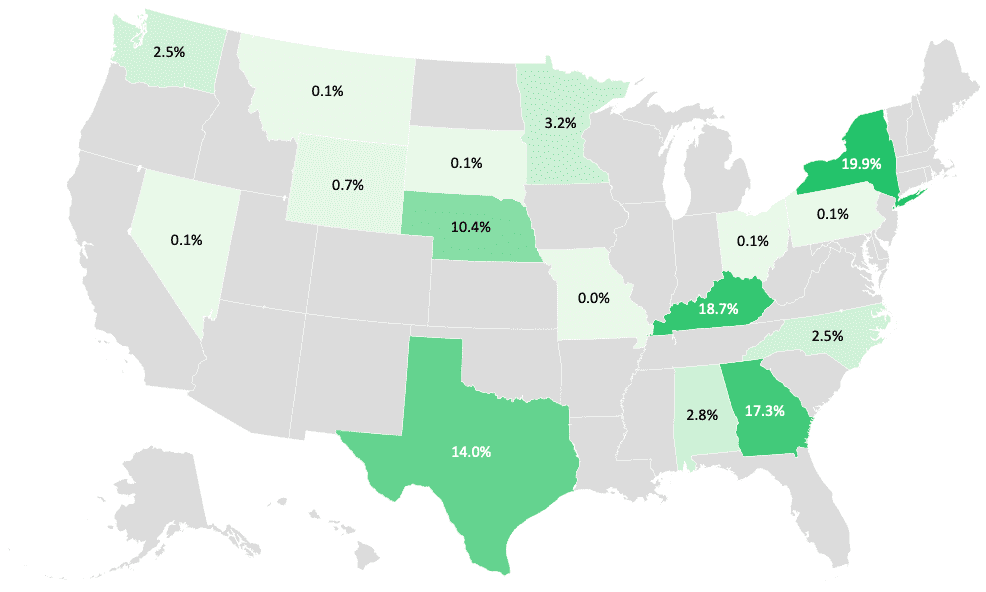 New York and Texas are winning the war to attract bitcoin miners.

A war is brewing among states is brewing to attract bitcoin miners, and new data suggests that a large number of them are heading to New York, Kentucky, Georgia, and Texas.

New York has 19.9 percent of bitcoin's hashrate, which is the collective processing power of miners. Kentucky has 18.7 percent, Georgia has 17.3 percent, and Texas has 14 percent, sccording to Foundry USA, the largest mining pool in North America and the fifth-largest internationally.

A mining pool allows a single miner to pool his or her hashing power with that of thousands of other miners around the world, and there are hundreds to select from.

Nic Carter, co-founder of Castle Island Ventures, who presented Foundry's data at the Texas Blockchain Summit in Austin on Friday, said, "This is the first time we've actually had state-level insight on where miners are, unless you wanted to go cobble through all the public filings and try to figure it out that way." “This is a far more efficient method of determining where mining takes place in America.”

However, as Carter points out, the Foundry dataset does not include all U.S. mining hashrate because not all U.S.-based mining farms use its services. Riot Blockchain, for instance, is one of America's largest publicly traded mining companies, with a significant presence in Texas. Because they don't use Foundry, their hashrate isn't included in this report, which is one of the reasons why Texas' mining activity is underrepresented.

Though the data only represents a small percentage of the domestic mining industry in the United States, it does reveal national trends that are altering the debate over carbon emissions.

Many of the top-ranking states are hotbeds of renewable energy, a fact that has already started to change the narrative among critics who believe bitcoin is terrible for the environment.

While Carter concedes that mining in the United States isn't entirely green, he claims that miners here are doing a better job of selecting renewables and purchasing offsets.

“Overall, migration has been a net positive,” he said. "Moving hashrate to the United States will result in a significant reduction in carbon intensity."

Where did all the miners go

When Beijing decided to kick out all its crypto miners this spring, about half of the bitcoin network went dark practically overnight. While the network itself didn’t skip a beat, the incident did set off the biggest migration of bitcoin miners ever seen.

The Foundry information reveals that the largest bitcoin mining operations are located in some of the most renewable states, which is a major changer in the argument over bitcoin's environmental impact.

Because miners compete in a low-margin business where their only variable cost is often electricity, they are encouraged to shift to the world's cheapest power sources, which are also typically renewable.

Take New York, which leads Foundry’s ranking. A third of its in-state generation comes from renewables, according to the latest available data from the U.S. Energy Information Administration.

New York's nuclear power plants contribute to the state's objective of producing carbon-free electricity, and, more importantly, the state produces more hydroelectric power than any other state east of the Rocky Mountains. It was also the country's third-largest hydro electric producer.

New York’s chilly climate – plus its previously abandoned industrial infrastructure ripe for repurposing – have also made it an ideal spot for bitcoin mining.

Coinmint, for example, has facilities in New York, including one in a former Alcoa Aluminum smelter in Massena that takes advantage of the area's plentiful wind power as well as the inexpensive electricity generated by the St. Lawrence River's dams. The Massena location is advertised as one of – if not the – largest bitcoin mining facilities in the United States, with a transformer capacity of 435 megawatts.

This year, New York considered legislation to prohibit bitcoin mining for three years in order to conduct an environmental evaluation to determine its greenhouse gas emissions. It has since been largely rescinded by lawmakers.

“Bitcoin mining in New York is actually relatively low in carbon intensity, given its hydro power,” Carter explained. “As a result, if New York were to outlaw bitcoin in-state, it would very certainly raise the carbon intensity of the bitcoin network overall,” Carter concluded. "It would be the polar opposite of what they were hoping for."

Kentucky and Georgia are two more states that have a significant portion of the bitcoin mining sector in the United States.

Kentucky is recognised for its hydroelectric and wind power, and its governor is supportive to the business, having just enacted a law this year that offers certain tax advantages to crypto mining facilities.

Another power source is connecting rigs to otherwise stranded energy sources like natural gas wells. Despite the fact that coal is a significant part of the energy mix, many mining enterprises there are turning to renewables.

And then there’s Texas

Texas may rank fourth according to Foundry’s data set, but many experts believe there is no question that it is the leading jurisdiction for miners right now.

Some of the biggest names in bitcoin mining have set up shop in Texas, including Riot Blockchain, which has a 100-acre site in Rockdale, and Chinese miner Bitdeer, which is right down the road.

Orders for new ASICs – the specialty gear used to mint new bitcoin – show that tens of thousands more machines are due to be delivered in Texas, according to The Block Crypto.

The appeal of Texas comes down to a few big fundamentals: Crypto-friendly lawmakers, a deregulated power grid with real-time spot pricing, and perhaps most importantly, access to significant excess energy which is renewable, as well as stranded or flared natural gas.

The regulatory red carpet being rolled out for miners also makes the industry very predictable, according to Alex Brammer of Luxor Mining, a cryptocurrency pool built for advanced miners.

“It is a very attractive environment for miners to deploy large amounts of capital in,” he said. “The sheer number of land deals and power purchase agreements that are in various stages of negotiation is enormous.”

Some miners plug straight into the grid in order to power their rigs. ERCOT, the organization that operates Texas’ grid, has the cheapest utility-scale solar in the nation at 2.8 cents per kilowatt hour. The grid is also rapidly adding wind and solar power.

“You just can’t beat the cost of power in West Texas, and when you couple that with a skilled power management company that can manage your demand response programs, it’s almost unbeatable anywhere else in the world,” continued Brammer.

Deregulated grids tend to have the best economics for miners, because they can buy spot energy.

“They can participate in economic dispatch, which means that they stop buying electricity when prices get high, so you have far more flexibility if you are active in the spot markets,” explained Carter.

Another major energy trend in the bitcoin mining business in Texas is using “stranded” natural gas to power rigs, which both reduces greenhouse gas emissions and makes money for the gas providers, as well as the miners.

Carter says that if this is fully exploited, flared gas in Texas alone could power 34% of the bitcoin network today – which would make Texas not only the clear leader in bitcoin mining in the U.S., but in the world.